We are now one year away from the centenary of the last apparition at Fatima.  From here on, time is of the essence in trying to satisfy all the requests of Our Lady at Fatima.
These requests, five in all, were reiterated in our last newsletter.  Three were expressed in the present tense and concern us directly, namely :  say our Rosary every day, make sacrifices for sinners and no longer offend our Lord.  (See newsletter n°36)
The two others, the consecration of Russia to the Immaculate Heart of Mary and the communion of reparation on the first Saturdays of the month, were at first, expressed in the future tense.  But, from now on, these last two requests are no longer in the future, because, since then, Our Lady has expressed them formally.  At Pontevedra, on the 10th of December 1925, she confided to Sister Lucia :

My daughter, look at my Heart surrounded by thorns which are continually driven in by the blasphemies and ingratitude of men.  You, at least, try to console me and say that all those who, for five months, on the first Saturday, confess, receive Holy Communion, say a Rosary and keep me company for fifteen minutes whilst meditating the fifteen mysteries of the Rosary in a spirit of reparation, I promise to help them at the hour of their death, with all the graces necessary for the salvation of their souls.

Two months later, on the 15th of February 1926, the Child Jesus repeated this request.  Here is what Sister Lucia wrote in a letter addressed to her first confessor, Monseigneur Pereira Lopes :  « The Child turned towards me and said :  ‘’And you, have you revealed to the world that which My Heavenly Mother asked of you ?’’».  In the dialogue which followed, the Child Jesus relaxed the conditions for the communion of reparation, thereby showing how much this devotion meant to God.  (See newsletter n° 28 - only in french at that date - and factsheet on the first Saturdays of the month.)

From that time onwards, Sister Lucia did everything she could to spread the devotion of reparation and regularly tried to convince her superiors, her confessors, and the religious authorities.  For example, here is what she wrote to Monseigneur da Silva, the Bishop of Leiria, on the 3rd of October 1928 :

The good Lord, in His infinite mercy, complains of not being able to put up much longer with the offenses committed against the Immaculate Conception of the Most Holy Virgin.  He says that because of this sin, a great number of souls will go down into hell, and He promises to save them, depending on whether the following devotion is practised, with the intention of making reparation to the Immaculate Heart of our Most Holy Mother.  (followed by the description of the different points of this devotion)

Two years later, Sister Lucia revealed a new request from Heaven regarding the first Saturdays of the month.  On the 29th of May 1930, she wrote to her confessor, Father Gonzalvès :

It seems that the good Lord is acting on me in the depths of my heart to make me ask the Holy Father for his approval regarding the devotion of reparation, that God Himself and the Most Holy Virgin deigned to ask for in 1925, and so, by means of this small devotion, give the grace of pardon to souls who have had the misfortune to offend the Immaculate Heart of Mary.  The Most Holy Virgin promises souls who seek to make reparation in this way, to assist them at the hour of their death, with all the necessary graces for them to be saved.

This letter is particularly important, because it specifies four essential points in the devotion of reparation of the first Saturdays of the month :

The good Lord promises to end persecution in Russia if the Holy Father deigns - and orders all the bishops of the Catholic world to do the same - to make a solemn and public act of reparation and to consecrate Russia to the Most Holy Hearts of Jesus and Mary, his Holiness promising, in return for the end of this persecution, to approve and recommend the practice of this devotion of reparation, as shown above (the communion of reparation on the first five Saturdays of the month).

This detail shows the extent to which God values this devotion, as, on a simple pledge from the Holy Father to approve it, He promises the end of persecutions in Russia.  On the 12th of June, Sister Lucia wrote again to her confessor to confirm all the requests from Heaven, and this using exactly the same terms as those in her letter of the 29th of May 1930.  (See the two letters on this website on the page Two letters by Sister Lucia dealing with the devotion to the Immaculate Heart of Mary)

The end of persecutions is only a supplementary grace accorded by God to show the ardent desire of Heaven to see this devotion established in the world and the wish that it by recognised by the Holy See. 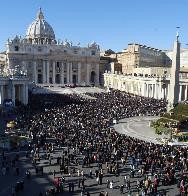 Note that the request addressed to Sister Lucia contains two distinct actions :  to spread the devotion of reparation, and to have it approved by the Holy Father.  However, it has to be admitted that neither of these have been realised at present :  first of all, the devotion of reparation is still very limited in our parishes ;  secondly, the Holy Father still has not, to this day, approved or recommended it.

This second point is quite astonishing, as the persecutions in Russia have, on the whole, ceased.  God values this devotion so much that he has not waited for the Holy Father’s promise to accord this grace !  Moreover, the Holy See still has not given its approval.  It is truly sad to see that this request,  even though it is so easy to realise, has not been satisfied.  Also, during this year which separates us from the centenary, it is urgent to respond to the request expressed by Our Lady.  We should work for it to be realised, from now until the day of the centenary of the last apparition at Fatima.  For this, we should mobilise ourselves on the one hand to work to spread this devotion around us (beginning with our parish), and on the other hand, to act at our level to send a request for its approval to the religious authorities, then to the Holy See.

To this end, many people have advised us to unite all the organisations wishing to work at spreading the devotion to the Immaculate Heart of Mary in general, and the communion of reparation on the first Saturdays of the month in particular.  Three organisations are presently associated in this initiative :  la confrérie Notre Dame de France, Ave Cordis and la Route de L’Europe chrétienne.  (For more details, see the page Partners on the website.)

Also, to help us achieve this objective, do not hesitate to let us know about organisations or movements who would accept to be our partners and work with us according to their own charisma.

But above all, we should practise and spread the communion of reparation of the first Saturdays of the month to respond to the call of Our Lady.

In union of prayer in the Immaculate Heart of Mary,