On the 13th of July 1917, Our Lady confided to the little shepherds :  « If men do not refrain from offending God, another and more terrible war will begin during the pontificate of Pius XI.  When you see a night that is lit by a strange and unknown light, you will know it is the sign God gives you that He is about to punish the world with war and with hunger, and by the persecution of the Church and the Holy Father. »

Twenty years later, on the night of the 25th to the 26th of January 1938, the sky was aflame with a strange glow.  From 9 o’clock in the evening until 2 o’clock in the morning, the night sky was illuminated with a red light.  This phenomenon was perceived in most of the countries of Europe, from Norway to Gibraltar, from Portugal to Greece, as well as in North Africa and in the United States and Canada.  At the time, everyone believed there was a gigantic fire.  The next morning, all the newpapers were talking about it.  The phenomenon was attributed to an aurora borealis.  The Bulletin de la Société astronomique de France described it in the following way : 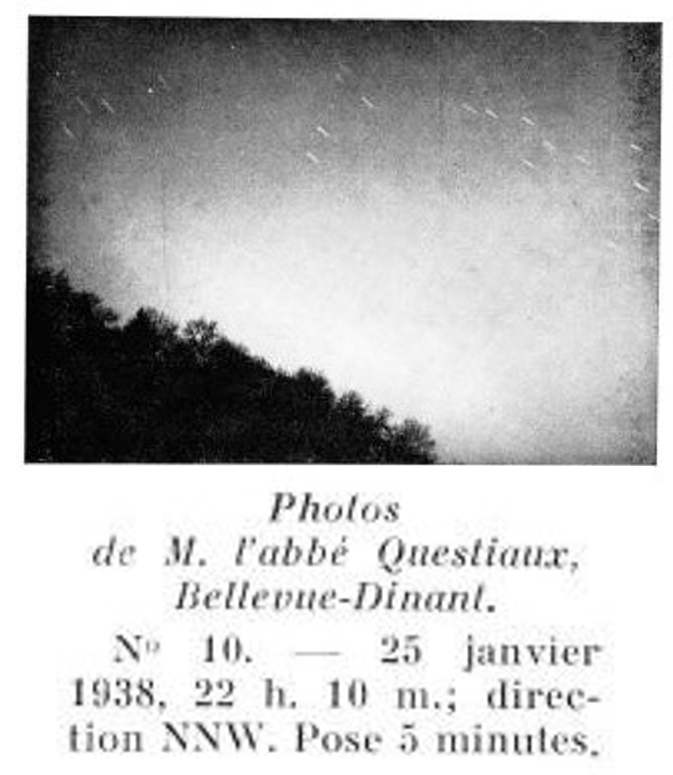 An aurora borealis of magnificent beauty was visible in France and in almost all of the countries of Europe, from Tuesday the 25th of January 1938, in the evening, until Wednesday the 26th, in the morning.  In the Swiss Jura, in England, as in the regions of the west, the south-west and the south-east of France, as far as Provence, and even further south, in Italy and Portugal, in Sicily and in Gibraltar, and even in North Africa, the phenomenon showed an exceptional intensity for these latitudes.  (…)
A blue-ish green glow, pale and pretty, covered the sky from the north-east to the north-west.  Gradually, the sky above lit up and formed an irregular, red vault.  A sort of crimson cloud formed at the north-east and moved towards the north-west as if pushed by a mysterious breath of  wind.  It moved back, undulated, expanded, faded, rekindled, while huge jets, whose colour changed from blood-red to orange-red to yellow, soared towards the zenith.

As for Le nouvelliste de Lyon it reported  :

An aurora borealis of exceptional magnitude furrowed the skies of Western Europe yesterday evening.  It caused an upheaval in a number of départements where the first reaction was the belief that it was a gigantic fire. The sky was alight like an enormous open fire in movement, creating a vivid blood-red glow. The edge of the fire was white, as if the sun was going to rise.  Doubtless, it was an aurora borealis, but according to Professor Pers of the Faculty of Science at Grenoble, one of an  exceptional magnitude.

To characterise such a phenomenon by the expression ‘aurora borealis’ is, in fact, inappropriate.   Actually, aurorae borealis generally happen at the north pole and the areas immediately surrounding it, but very rarely below the latitude of 50°.  Moreover, they never have this allure of being a gigantic fire with a predominantly red colouring.  While they can come in different colours, the dominant colour is green and not red.  Finally, they have never been so widespread.  While they can sometimes stretch over a very long way, they form, for the most part, a ribbon about ten kilometers long.
Sister Lucia never accepted that this phenomenon could be attributed to an aurora borealis.  Here is what she says in her third memoire :

Your Excellency is aware of how, a few years ago, God showed this sign which the astronomers wanted to be known under the name of aurora borealis. I don’t know ;  but it seems to me, that if they looked at the thing carefully, they would see that this was not, and could not be, an ordinary aurora borealis, given the manner in which it presented itself. Whatever it was, God used it to make me understand that His justice was ready to strike at the guilty nations, and because of this, I began to ask for, with insistance, the communion of reparation and the consecration of Russia.

Even today, the astronomers are divided as to the origins of this phenomenon, because nothing similar has ever been seen before or since :  it is a phenomenon unique in history.  Another astonishing point :  the regions where the glow was visible correspond exactly to the zone of Christianity which was going to be set alight by the Second World War !

And even if it was the most exceptional aurora borealis ever seen on this earth, the fact that it had been announced twenty years beforehand, constitutes a truly exceptional prophecy, along with the miracle of the dancing sun on the 13th of October 1917.  These two prophecies announcing extraordinary natural phenomena, and observed by a very great number of witnesses, give to the apparitions at Fatima an authenticity which is also exceptional and which confer on them a place completely apart in the history of apparitions.  No other apparition, either before or since, has been authenticated in such an extraordinary way.

Therefore, if Our Lady has chosen such means to authenticate Her message, its importance is equally exceptional.  And so, it is particularly important to know it well, and to make it well known.

In union of prayer in the Immaculate Heart of Mary.

Some News from the Project

For the next first Saturday of the month, the Notre Dame du Lys chapter has had the good idea to send us the hour of the Mass celebrated in the spirit of the devotion of reparation as asked for by Our Lady.  You will find the details on the page accessible by the new button ‘1st Saturday of the month’ situated at the top of the website.  Henceforth, we will list all the places and times of Masses for the First Saturdays of the Month which we receive.

A number of people have confided prayer intentions to us.  It seemed to us pertinent to propose them to everyone by putting them on a special page accessible by the new button ‘Rosaire’ in the menu situated at the top of the website.  Remember what Sister Lucia said to Father Fuentès :  « The Most Holy Virgin, in these last times in which we live, gave a new impetus to the recitation of the Rosary.  In such a way, there is no problem, no matter how difficult, temporal, or especially spiritual, with reference to the private life of each of us, of our families, families throughout the world, or religious communities, or even the lives of peoples and nations,  there is no problem, I say, no matter how difficult, that we cannot resolve by praying the Holy Rosary. »

At this time, almost 1,500 people have consecrated themselves to the Immaculate Heart of Mary on one of the dates proposed since last December.  The actual number is higher because many people have told us that they have consecrated themselves by organising their own preparation, and so, without registering to receive the daily meditation.  To respond further to Our Lady’s call, spread this devotion around you (see HERE the dates proposed for the consecrations).