Having read the last newsletter, one of our friends, who is a religious, pointed out to us:  « You’re right to emphasise that one can quite legitimately speak of “consecration to the Holy Virgin” and that many saints and popes have done this.  However, it seems to me that it could be said that the term “consecration” or “consecrate oneself” does not have the same sense for God as it does for a saint.  It is analogous.  Only God can totally possess our person.  We give ourselves to Mary so that She can give us to God. »  Our warm thanks to the honourable reader for making this clear and allowing us to rectify an omission due largely to the indispensable concision of these newsletters.

The point was remarkably developed by Saint Louis-Marie Grignion de Montfort in his Treatise on the True Devotion to the Blessed Virgin.  For example, in n°115, he recommends « beginning, carrying out and completing our actions through her, in her, with her and for her in order to do them through Jesus, in Jesus, with Jesus, and for Jesus, our last end. »  And a little further on, in n°120, he specifies:

Thus, the ultimate goal of consecration to Our Lady is to move closer to Her Son.  Moreover, this is the teaching of Our Lady at Fatima.  On the 13th of June 1917, She said to little Lucia:  « My Immaculate Heart will be your comfort and the way which will lead you to God. »

The fruits of consecration to the Immaculate Heart of Mary

Even if the point of this consecration is to move more surely towards God, in order to encourage us to do this, it is, without doubt, useful to remind ourselves of the fruits of consecration.  The first fruit is a particularly precious help in attaining our salvation, as consecration is part of the devotion to the Immaculate Heart of Mary.  Our Lady spoke of this when she said:  « To whomsoever embraces this devotion, I promise salvation. »  (see newsletter n°5)

However precious it may be, this help is not the only fruit of this consecration.  There are gratifying consequences in many areas.  For example, on a personal level, it can bring good health to the body, as in the case of Bertille, who was miraculously cured of a serious heart condition (see newsletter n°19).

As for collectivities, such a consecration can bring benefits to all its members, be they believers or not.  For example, the parish of Our Lady of Victories in Paris was totally converted following the consecration made by its parish priest, abbé Desgenettes,  on the 11th of December 1836.  (see newsletters n°18 and n°22)  Likewise, the villages of Asnelles, Meuvaines and Saint Côme de Fresné were protected during the allied landings of June 1940 even though they were right in front of Omaha Beach (see newsletter n°18).

Many countries followed the example of Portugal.  Spain was consecrated in 1954.  The Italian bishops, meeting at Catane, solemnly consecrated their country on the 13th of September 1959.  And to date, the latest countries have been England and Wales which were consecrated on the 18th of February 2017 by Cardinal Nichols, archbishop of Westminster.  (See the article on the website InfoCatho)

Finally, there was the consecration of the world by Pope Pius XII on the 31st of October 1942, renewed on the following 8th of December, which had as fruit the spectacular turnaround of the war two months later.  (see the document on consecrations made by Pope Pius XII)

In this way, families, parishes, counties, countries, … simple faithful or entire communities, all those who, in the past, consecrated themselves to the Immaculate Heart of Mary, have been protected by our Heavenly Mother and have received immense graces from Her.  So, for the love of Our Lady first of all, and to respond with eagerness to her wishes, but also to benefit from the numerous graces which She has promised to bestow on us, especially that of leading us to Her Divine Son, we should consecrate ourselves to the Immaculate Heart of Mary;  consecrate our families, our schools and our children;  ask our parish priest to consecrate or renew the consecration of our parish, etc.

Celebrating the centenary of the first apparition 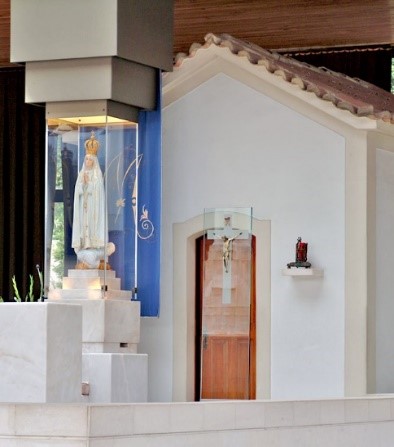 The 13th of May is approaching and we should not delay preparing for this great day.  To this end, we would like to mention that the Salon Beige has had the excellent idea of encouraging the organisation of vigils on the evening of the 12th of May and to announce them on its website, the organisation of these vigils being left to individual initiatives.

However, the model joined to the Salon Beige article suggests an evening organised around a Mass followed by gospel songs and a candlelight procession.  This organisation does not seem to us to be the most pertinent, as gospel songs and candlelit marches are not traditional devotions and don’t have much to do with the devotion to the Immaculate Heart of Mary.  Instead of this, we suggest that after a Mass to the intention of the Immaculate Heart of Mary one could

Also, rather than organise these ceremonies for the 12th of May in the evening, it would be preferable to do them on the 13th of May, late in the morning for example, so that they can happen as close as possible to the hour of the first apparition.  The 13th being a Saturday, there’s no real reason for having the ceremony the evening before;  and the choice of this date gives a whole day for the organisation of a greater number of activities:  confessions, complete Rosaries, Solemn Vespers, torchlight processions, etc., and so make this day a real festival.

In union of prayer in the Immaculate Heart of Mary,