We have now reached the one hundredth anniversary of the apparition of the 13th of October 1917.  This is a particularly significant date in the history of mankind, as a phenomenon defying all known laws of nature occurred:  the miracle of the sun which took place that day has no equal whatsoever in all of history.  Before this, there were only three similar phenomena defying the laws of nature:  the Flood, the Sun Standing Still during Joshua’s battle against the Amorites at Gibeon (Joshua 10:12-13) and the Darkness of Good Friday.  This miracle proves that there was a divine intervention, as neither men nor demons can play with the laws of nature in this way.  (See newsletter n°12)

The Miracle of the Sun is often contested and many are those who have sought, and still seek, a natural explanation for the phenomenon.  It has to be said that no observatory, in particular that at Lisbon, recorded any modification whatsoever in the sun’s movement that day.  Yet 70,000 people affirm that they saw the sun dance. 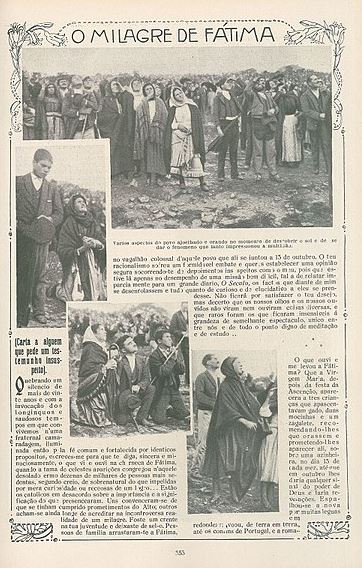 Some believe that it was a case of collective hallucination.  Unfortunately, the criteria for such an hallucination were not met.  In fact, at least a third of the witnesses were anti-clerical, having come to Fatima determined to find proof that the apparitions were faked.  Notable amongst them was Avelino de Almeida, the chief editor of a major liberal daily newspaper in Lisbon, O seculo.  He came with the purpose of demolishing Fatima, as he described it in an article which appeared on the same day.  Yet he saw the phenomenon and would not admit to having been subject to an hallucination.  Also, in the issue of O seculo on the 15th of October, he could do nothing but describe the phenomenon to which he had been a witness.  Even admitting the hypothesis of a collective hallucination, it is difficult to believe that it could concern 70,000 people at the same time.  This would be a truly unique phenomenon.  For it was never possible to find a single person who affirmed that he had not seen anything.  Also, it does not explain how the inhabitants of Alburitel, a little village about fifteen kilometres away from the apparitions, were able to see and describe exactly the same phenomenon.

Because the theory of collective hallucination doesn’t hold, others have tried to explain it as an exceptional natural phenomenon such as phosphenism (image retention by the retina after gazing at a specific light source), or even as UFO activity.  Others invoke a meteorological phenomenon having distorted the view of the sun (see the article in Le Figaro of the 13th May 2017).  But what these authors usually forget to say is that the phenomenon has only been observed once in the history of mankind.  For one thing is sure and certain:  the phenomenon of the 13th of October 1917 had never been seen before!  And after, it was only seen once:  by Pope Pius XII who watched it from the gardens of the Vatican on the 30th and 31st of October, and the 1st and 8th of November 1950.  But it was only seen by the Pope:  no other person saw it although he spoke of it to a few people close to him.

This Dance of the Sun is therefore a phenomenon which is not only difficult to explain by natural laws, but is, above all, unique in history.  Those who seek, at whatever price, to find a natural explanation for the phenomenon should at least recognise its uniqueness.  In itself, this uniqueness is necessarily significant. 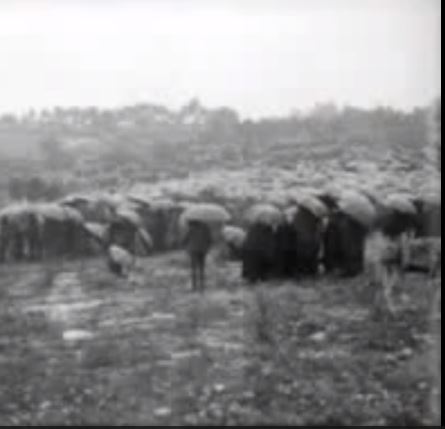 Moreover, those who hold that it is a natural phenomenon often forget to mention that when the phenomenon was over, the witnesses, who were soaked to the skin because it had rained all night long and all morning, discovered that their clothes were completely dry.  How could the clothes of 70,000 people have dried in under fifteen minutes?  Some people offer explanations of varying extravagance but little conviction, because here again the phenomenon had never been observed before and has never been reproduced since.

Finally, there is another question just as strange:  how was it that three little unschooled children could foresee that such a phenomenon would occur, and predict the place, the day and the hour?  For they announced it three times:  after the apparitions on the 13th of July, the 19th of August and the 13th of September.  There again, the silence of those who would find a natural explanation is striking.  This is why some of them are obliged to suggest that the phenomenon is due to “spirits” which would have informed the children beforehand.  But why “spirits”, and to what end?

Anyway!  All these explanations aren’t worth much.  The only real explanation is that a celestial person, endowed with considerable power, had told the children in advance, and, on the said day, activated this phenomenon.  However, this explanation is somewhat similar to that affirmed by those who attribute this to “spirits”.  But we know it’s not “spirits”:  it is our Heavenly Mother Herself who came to Fatima to authenticate Her presence by an unmistakeable sign and who announced it to the little seers three times in the preceding months.  Here are Her words such as Lucia reports them in her fourth memoir:

Another fact which is just as astonishing as that of the miracle itself, and the related prophecy, is the total silence with which it has been surrounded by the authorities of the Church, as if this miracle was an embarrassment.  In what way is this miracle embarrassing?  Jesus performed lots of miracles during His life on this earth.  Why should God, the Creator of the universe, not be able to do the same?  Yet the Vatican never speaks about it and has never evoked it during this centenary year.  The official website of the Sanctuary hardly talks about it except to mention a temporary exhibition recounting the apparition of the 13th of October, but the story of the miracle itself is not told.  Is it considered insignificant, or superfluous even?  This hypothesis is impossible to maintain because in which other apparition can you find a prophecy so precise, and fulfilled just as accurately, and in front of such a large number of witnesses?  Why does the Vatican not repeat this?

So, we shouldn’t hesitate to understand, practise and spread around us the devotion to the Immaculate Heart of Mary.  Because it is God’s wish (see newsletter n°4).  Moreover, the Holy Virgin has promised salvation to those who practise it (see newsletter n°5).  Finally, this devotion has as fruits the conversion of sinners and peace in the world.

Nota:  For those who would like more details than it is possible to give in a newsletter concerning the miracle of the 13th of October, this can be found in the book Photos des miracles de Notre-Dame de Fatima by Mgr. Louis Picard, published by Le Jardin des Livres.  (It can be ordered by internet, in particular on the Chiré website, or on the publisher’s website).

The letter of support for Cardinal Burke seems not to have arrived at its destination.  According to the French post, it was lost in the transfer between the French and Italian postal services.  Consequently, a copy of the letter has been sent, in the hope that this second one will reach him.

In union of prayer in the Immaculate Heart of Mary.
Yves de Lassus,
Cap Fatima 2017.